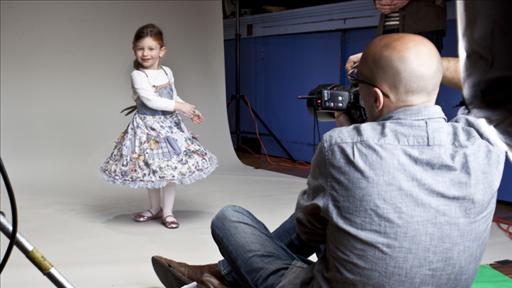 Parents readily snap and share tons of photos, causing some to ask why would they want a school portrait of their child with a forced grin and hair brushed badly in front of a blue-speckled background. Katie Rosman has details on Lunch Break.

In their annual school pictures, her kids usually look ill at ease, with too-toothy smiles and hair parted to the wrong side against a grainy blue backdrop not unlike that which the mother of three sat before when she was a school girl in the 1970s and ’80s.

“The pictures are terrible—and I have really cute kids!” says Ms. McGuire of Austin, Texas, of her children, ages 9, 7 and 2.

Say “cheese!” Or rather, say, “fake smile against a cheesy background.” Across the country, parents, students and schools are in the thick of the annual ritual of Picture Day.

The school picture used to be among the main photo records of a child each year. Parents ordered copies in various sizes to frame on mantels and send to grandparents. Students swapped wallet-size photos with friends.

Now, with parents capturing hundreds of photos of their children on smartphones and digital cameras, many, guiltily, wonder if they need the often-unflattering school photo. They’re already sharing moments, big and small, with friends and family on Facebook and other sites. 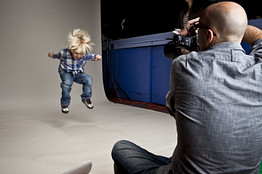 Bryan Derballa for The Wall Street JournalHenry Warden, 3, jumped for photographer Dennis Kleiman during his school portrait session at Williamsburg Northside School in Brooklyn on Nov. 3.

Ms. McGuire, a photographer herself, still feels moved by nostalgia to order a photo package. She goes for the smallest package offered that includes the kids’ class photo. She just received this year’s prints. “They’re in a big stack of junk that needs to be filed,” she says.

Lisa Adams, a mother of three in Darien, Conn., stopped ordering her children’s school photos a few years ago. She only feels guilty for not feeling guilty, she says. “I have so many good pictures of my kids,” she says. “Why do I need the purple background and weird smile?”

Some school portrait companies say they are seeing an impact on their business. Fox’s School Portraits, in Bakersfield, Calif., photographs students at 220 schools. In the past four years, says company owner Linda Carter, its revenues are down 20%. She says the company is trying to appeal to customers by taking photos of students dressed in sports jerseys or with their siblings. Some are also trying to break with the traditional headshots with three-quarter-length poses.

In most markets, photo packages range from about $10 to $50. Most companies offer deals so parents can purchase a digital file of the school photo or a variety of different-size photos, or a combination package of digital and print.

Kelsey and Dennis Kleiman of Brooklyn, N.Y., were underwhelmed by their daughter’s school pictures. So Mr. Kleiman, a professional photographer, volunteered to take less-stilted portraits of their daughter’s classmates. It was such a hit with the parents that in 2009 Mr. and Ms. Kleiman, whose children are 3 and 6 years old, founded a school portrait company, Stomping Ground Photo. It is among a handful of companies trying to recast school pictures.

Stomping Ground photographs are taken against a plain background and capture kids doing kid stuff: jumping, laughing, pouting. It is now photographing about 20 schools in New York and Los Angeles. Parents can view proofs online and decide which photos to purchase.

Waleska Wilborne is glad that her older child’s school, Williamsburg Northside Preschool in Brooklyn, switched this year to Stomping Ground. Ms. Wilborne says that in the past she has always ordered the smallest available package because she wants her son’s class photo. “He always looks like a deer in headlights so I’m excited we’re trying something new,” she says.

Last week, Mr. Kleiman set up shop in the school gymnasium. Camera in hand, he got on his knees, photographing the children at their level.

A blond boy, Henry, stepped onto the set and looked at the ground.

“What were you for Halloween?” Mr. Kleiman asked.

“What are Lightning Man’s powers?”

“He lights up the night,” Henry said and began to jump around, thrusting his fists, demonstrating his best Lightning Man moves as Mr. Kleiman snapped away.

Henry is the son of Amy Warden, head of school for Williamsburg Northside Schools. She says the switch from a more traditional school portrait company to Stomping Ground was made at the request of the school’s parents organization, which wanted contemporary, relaxed photos.

Ms. Warden already sees the benefit: “Only one kid has refused to have his picture taken and that is a better ratio than ever,” she says.

Mr. Kleiman, who has photographed musicians, athletes and CEOs for record labels and magazines, says the combination of fatherhood and his past work prepared him for the schools gig. “The temper tantrums, the destroying the set, I’ve been training for this my whole career,” he says.

It can be difficult for small companies to compete for business against bigger, established players that dominate school photos, in large part because public school systems often ask the portrait companies they commission to give them a percentage of the parents’ spending on photo packages. Sometimes, schools bill “Picture Day” as a fund-raiser, alerting parents that they will benefit from money paid to the photography companies.

Companies like Lifetouch National School Studios, which photographs about 20 million students around the country each year, gives schools anywhere from 10% to 25% of parent payments. Each arrangement is individually negotiated. “There may be a commission that a school is requiring or sometimes a school calls it a fundraiser,” says Kelvin Miller, corporate vice president of Lifetouch Inc., Lifetouch National School Studio’s parent company.

Mr. Miller says that although the digital age has made it easier for parents to take their own photos, the same technology results in parents having fewer photographs actually printed and available to display at home.

Kim Winfrey of Noblesville, Ind., is an avid photographer of her three children. But she says she lacks time to edit and print photos for albums and scrap books. “I buy the smallest package and I’ll send a picture to my sister and my parents,” she says.

For Ms. Winfrey’s daughter Kennedy—a 10-year-old in the fourth grade—Picture Day is about the pageantry as much as the photographs. “You get to dress up really pretty and do your hair special,” she says.

Write to Katherine Rosman at katherine.rosman@wsj.com

This site uses Akismet to reduce spam. Learn how your comment data is processed.